Some days my body feels more like stone than it does like water. On the mornings it rumbles like it will crack open, I walk more slowly to carry the fragile thing within me with grace. In the past month I have often wondered how anything could be so delicate and heavy at the same time, but maybe we can’t grasp the weight of certain things.

Perfectly lodged inside me, its arms—or are they wings?—sit poised like an anchor. I imagine it hanging in the balance, the sole survivor of slow earthquake. Some days it feels like an entire war is waged there.

The Kyleena® is a small, white, T-shaped, soft plastic. It is predated by decades of copper and metal, synthetic tools like emergency keys or allen wrenches with girl names. We were escaping the tyranny of biology, the women of the Sixties said. In contrast to the pill, the IUD is endorsed as low maintenance—by fully integrating with your body, it eliminates the need for a daily routine, monthly refills, and trips to the pharmacy. To adopt the IUD is to become what Manfred Clynes coined the cyborg: an organizational system in which robot-like problems are taken care of automatically and unconsciously, leaving (wo)man free to explore, to create, to think, and to feel. Positioned as an emancipatory technology, as female contraceptive historically has been, the IUD allows women to resist the natural forces of evolution and reclaim control over their bodies.

Feminist theorist Donna Haraway fantasized about a future where our hybridity with technology would turn us into cyborgs. As creatures of a post-gender world, the dissolution of binaries might set us free from a certain determinism, set us free from Woman who has only retained value in contrast to Man (the default, the first and foremost, everything). This fever dream of ultimate synthesis was to make ambiguous the difference between natural and artificial, mind and body, self-developing and externally designed—dichotomies formerly applied to non-human organisms and machines.

It was a fantasy of pathological destruction.

While we are in bed one night, a man I have only known for a few weeks asks me to take my nipple piercing out. When he handles me with urgency and the metal pulls in its home, the pain is sharp like the original needle. I push our bodies apart and he looks at me with hunger. I know that what he will ask of me is not out of care. But because he asks, I take the piercing out.

Although it enhanced nothing but some sense of immunity, the nipple piercing was the first object that made me feel part-cyborg. Four years ago I watched blood bloom through the white silk shirt I wore exactly for that occasion: to bleed. To bleed and to know that the decision to do so was entirely mine. To know that my body was not an immutable thing. For four years it would represent my ability to hold something cold and non-belonging and declare it as part of me.

Detached from this object once emblematic of control and resilience, I am bare and missing. I wonder how much of its removal serviced the maintenance of his pleasure under the guise of removing a source of my pain. I wonder how much of myself I have surrendered for the sake of someone else’s desire. Returned to unadulterated human form, I do not feel whole at all.

Days later, he asks me if I would consider going back on birth control. I don’t remember how much of the conversation I spend in silent reflection on the decade tethered to my circular pink pack, a sundial I constructed my life around like it was the only way to tell time. While the pill was supposed to release me from certain biological fates, it had routinely restrained me to others. When you have to remember something every day, to set an alarm for it, to stop time, to make room, your life adjusts around this extraordinarily minute detail. Following Clyne, to restructure for something else is to become a slave to the machine. Hadn’t I wanted to be free?

We talk about the studies that proved the pill robbed women of their sanity. I am reluctant to revisit the madness. We laugh about the lack of male counterparts. I wonder why his gratification so frequently seemed to come at a cost only my body could pay. You guys won’t even use a fucking gel, I say. Of course it is women’s work, to bear this for you, is what I really mean. Men will have none of it, he responds in agreement. Men will have none of it, is what he means. Since 1990, only seven male contraceptive efficacy studies have been executed—none have advanced to FDA approval.

Only in hindsight do I understand that by the time he asks me to go on birth control, I am already primed to agree to a myriad of other modes in which I integrate with the world and separate from myself, in the way women often do. That by then, the road to compliance had already been paved. Opposite in action but identical in consequence, this reunion would become the perfect foil to the severance from days before. At the time I wonder why, in the age of powerful women, of so-called nasty women, of free women, we continue to place the burden of bearing and not bearing on women like our bodies are first homes to hold and be held in. That we are first mother or not mother. That a man can be infinite things, but firstly and lastly a man, and never for the sake of anyone else.

Sitting across from him at dinner, I wonder just how much of my body I am willing to give him. A final silence falls. As the conversation closes he says, I want to come inside you. 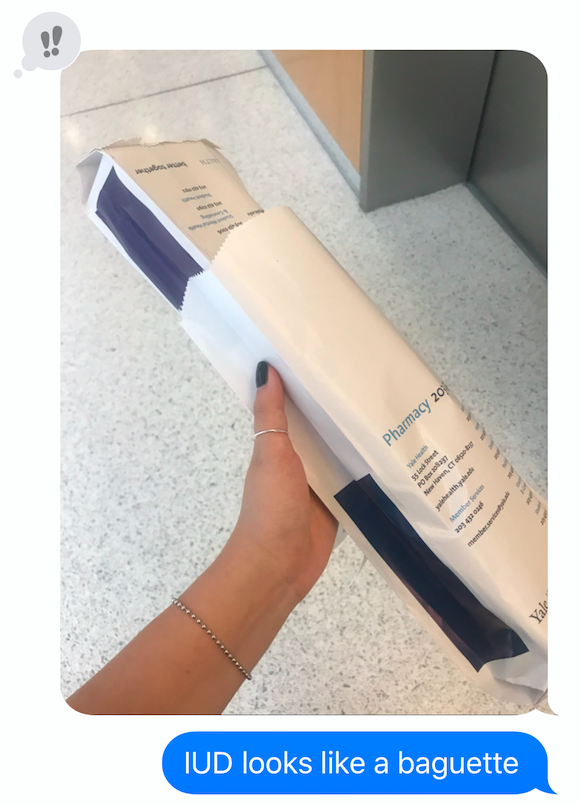 The morning of the insertion, I carry the IUD in its comically long rectangular box from the first floor pharmacy to the second floor OB/GYN, noting the outsized absurdity of its form. Though my doctor had warned me of potential discomfort during insertion, I only feel adrenaline at the prospect of passing another test of survival—to prove myself closer to immortal. Whether it was through the delectation of my own pain or the merging with metal, the piercing years prior was an act of playing God.

And yet the IUD insertion turns out to be something else entirely. If I had a clear and uncrossable threshold for a pain so intense and raw, I absolutely did not have one for a discomfort so quiet and widening. It ripples through my body, muted; a slow violence impossible to pinpoint.

I don’t notice how truly uncomfortable I am until my doctor asks me if I want my phone to distract myself. It is dead, a useless and unreachable thing, so I count the tiles on the ceiling instead, like I did when I was younger, without the internet to placate pain. This regression throws into stark relief that I am, in fact, in a woman's body. The whole thing starts to feel anachronistic, like a dystopian vision conceived of twenty years ago. My doctor moves with rigidity, sterile like the procession of tools she uses inside me, calling them by names far too technical for my understanding but naming them nonetheless.

Sometimes it is hard to recognize pain that isn't fast. You begin to wonder: does this hurt or am I delusional? Resistant to giving space to the subtle and emerging thought that there was something undeniably wicked about this procedure—nearly Atwood-esque in affect, gloomy and austere—I ask her questions like When are women the most fertile? and when she answers as expected, I laugh like I had already planned.

I leave the clinic feeling more Woman, more horrifically Woman, than I have ever felt. When I am in bed with a hot pack on my body to pacify the battle waging against the new invader, I am more synthetic than I have ever been.

These days the blood does not stop and I can’t help but to think it was blood I did not ask for. The process of merging with technology as Woman was romanticized as a liberating force, one that would shatter the way power emanated through everything. Haraway imagined we could blur the boundaries between human and machine so deeply that we would break through our narrow, binary conceptions of gender. To become the cyborg would be to deconstruct the systems of myth and meanings structuring our imaginations—to become a kind of disassembled and reassembled, collective self suited for postmodernity.

And yet as I sit here in my cyborg form, I can only think that we often carry the same entrenched capitalist forces from the outside to the inside, from public to private. I am reminded every day that as a woman, there are kinds of labor that are always only ours. How do we conceive of new hybrid forms of being without embedding in them the social relations we have carried for histories? Even as the IUD is championed as a release from our grueling obligations to the pill, such automated enhancements often extricate us from one kind of subjugation only to bind us to another.

Thinking back on the equal and opposite actions of removal and insertion, of breaking apart from metal and merging together with plastic, I wonder if there is anything inherently emancipatory in our synthesis with the artificial. Underpinning both processes are questions of who we are asked to be, who we are allowed to become, and when.

The morning after I took my piercing out I had wondered: do I feel more authentic without its interference?

With a new device now deep in my body I ask: do I possess more agency when fused with machine?

Yet buried in both of these questions is really one: is my own liberation enough?