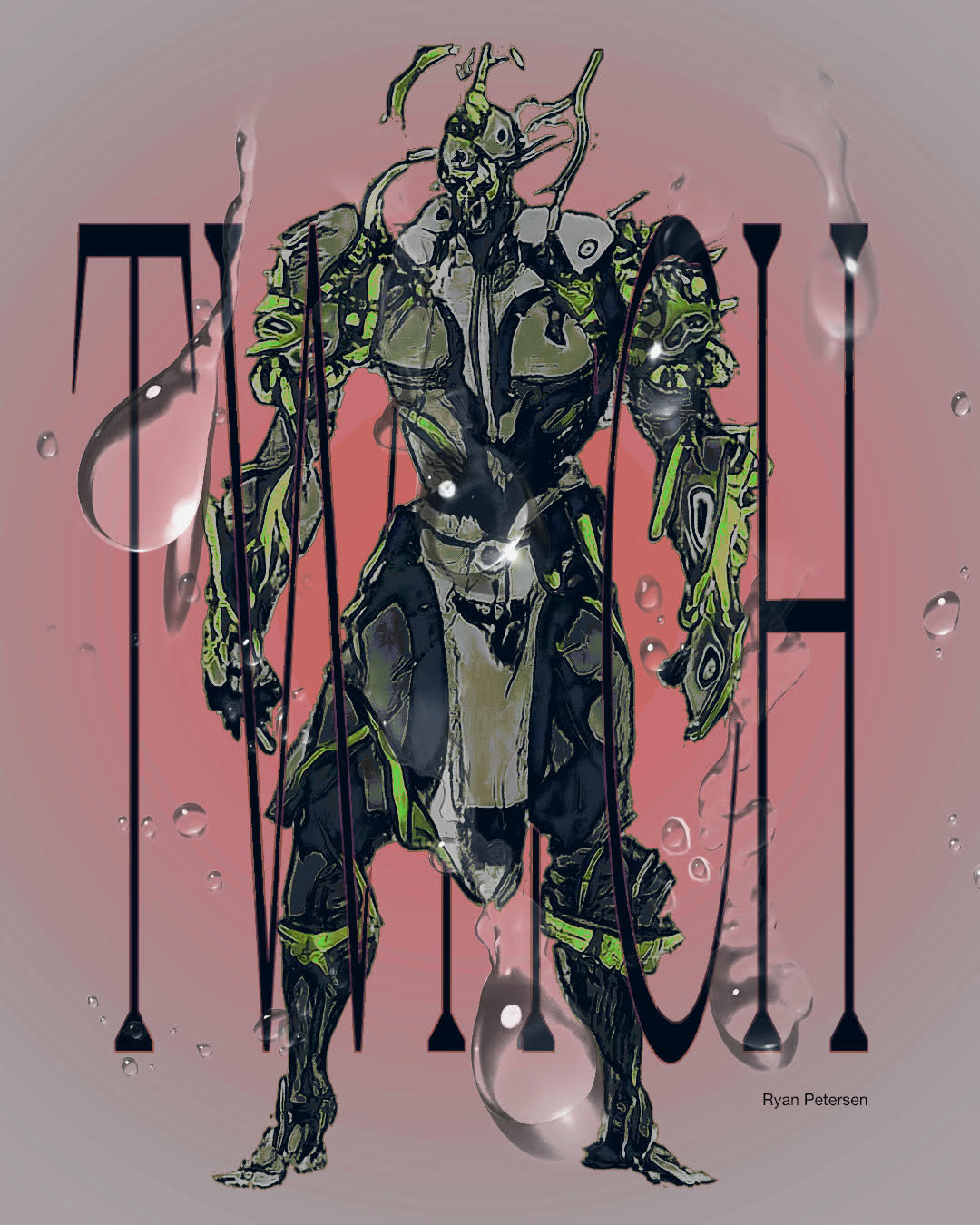 The priestess fell to the floor and choked in a fit of static. There is another prison…a shadow prison…built within the ruins. Go there, my pilgrim. The neural connection short-circuited. Her body tensed upwards and disintegrated into a thousand micro-spheres.

“Another nanobot cluster down the drain,” said Mateo. A running theme throughout the game was the inorganic world attempting to replicate the human form. Collectivist clouds of lesser robots came together, so that they could pose as a single, cellular being. Within the in-game universe, these characters often met a tragic end. A body without organs was a difficult thing to sustain.

And she said nothing about the golden figure, I typed. Untrustworthy?

I watched my message enter the chat. Mateo looked up at the camera and pointed his finger in affirmation. “When you’re right you’re right Crono.”

Crono, my username—the sensation of being seen gave me a jolt of libidinal energy. And then a pang of worry. I began to question what I was doing. Me on my computer, watching a kid who plays video games on his own computer. Why didn’t I just play the game myself? Because there were layers to the streaming experience, that's what I told myself. It was the complexity that compelled me.

I knew I was attracted to Mateo. He was beautiful, and I tried to take in as much of his face as possible. My eyes gravitated toward his lips. Plump pouty things that were always wet with a slight glaze of saliva. Or was it a gloss? I found it hard to believe he’d wear makeup. And yet his lips appeared so unreal at times, as if his cam footage itself were processed through a beauty filter. Or a deepfake app. I imagined what it would be like to kiss him. Soft fruit pressed against my philtrum. The weight of his tongue in my mouth. An earthen taste to his spit, like water from a deep well.

But if I allowed myself to peel back this surface-level attraction, I found there to be a deeper appeal hidden beneath, one inherent to the streamer setup. I entered into a theoretical framework, one in which I saw Mateo as my own player avatar, within a separate game. A diagram was sketched out in my head.

Fig. 1 was me: I was at my keyboard. I held sway over Mateo through the chat.

Fig. 2 was Mateo, streamed onto my computer screen: he held his own controller. Mateo played as the avatar in the game.

Fig. 3 was the unnamed avatar: he looked down a shadowed corridor. A derelict spaceship lay ahead of him.

This mental diagram clearly illustrated a field of play much larger than it appeared at first glance, with at least three degrees of possible remove (Fig. 1-3). Through the chat interactions, I controlled Mateo. Or rather, there was group control, along with the other users in the chat. Mateo excavated the open world of the game. And in turn we excavated Mateo.

There were several personal details one could glean from Mateo’s streams, if close attention was paid. He was of Puerto Rican descent. He lived in Southern California, but I remained unsure of where exactly. A few location tags on his Instagram pointed to Chino Hills. That would place him only about forty-five miles from my parents’ house. Mateo lived with his mother in a small condo. He was the youngest child of three. His two older brothers moved out a few years ago. He had just turned eighteen. He was an Aries. He dropped out of high school last year. He was studying for his GED. He worked part-time at Starbucks. His best friend was a girl named Madison. He made no reference to dating. No stated preference for boys or girls. He was six-foot-one. He had a map of the world pinned to his bedroom wall. His favorite drink was Glacier Freeze Gatorade, from which he took large swigs during his streams.

I signed up to be a Tier-Three Subscriber for his channel, costing me about twenty-five dollars a month. The perks included a monthly private stream and privileged chats. This was the reason why my comments always rose to the top, above the non-subscriber riff-raff. A private stream for premium subscribers was scheduled and rescheduled a few times since I had signed up. Mateo canceled the most recent one the day of, a few hours before it was scheduled to start. He cited a family emergency. I didn’t mind; I knew the private stream would happen at some point. The contours of his personal life would slowly come into focus. I carved the stray details he offered me into a mental high-relief.

Mateo’s avatar walked through a large torture chamber. Tubular devices made of green chrome were laid out in a tight grid, like terracotta soldiers. Skeletal remains protruded from one of the coiled appendages. I imagined the machines sucking the life out of prisoners. But there was no given lore to explain how they had once been used. No obvious practicality as instruments of torture. There was a lull in the game. Mateo had gone quiet. The chat fell off. An opening for true connection presented itself. I began to type.

Have you ever heard of those empty property developments in China? The Chinese ghost cities? This level reminds me of them.

“No, I don't think I have. What are they?” He scratched at the razor bumps underneath his chin.

Giant urban projects erected at the edge of the Gobi desert, I typed. Built in the hopes that the country’s economic growth would soon reach Inner Mongolia. Residential buildings left empty, a construct-now-and-find-the-residents-later approach. They were the mirror image of the game’s abandoned cityscapes. An urban environment that existed in-waiting. Shopping centers and plazas untouched, save for the powdering of the desert sand, their utility left in waiting. A temple made for a god without followers.

“Ok wow.” Mateo's eyes darted over the screen as he read. I could make out my chat log reflected in the glow of his iris. “Spooky vibes. China’s kinda wild, huh?”

I nodded along in agreement, as though he could see me. China was kinda wild. I had read an article earlier that morning about an iPhone factory worker who jumped from his employee compound roof, only to get his head caught in the suicide prevention netting. He stayed there for hours, still alive but his neck fully broken. Middle management couldn’t figure out the best way to cut him down. The factory continued its operations that day, without pause. A true horror story. And yet—my desire to visit the country remained strong.

I saw myself boarding a high-speed train, an express liner to the remote ghost city. There was a phantom companion at my side, a shadow puppet with no discerning features. I wore a bucket hat and tiny-frame sunglasses. We arrived to find the city in the midst of a dust storm, half-finished towers swaying in the wind. We walked through a large shopping mall. Every store was empty. The elaborate water fixture had gone green with algae. I asked my faceless partner to take a picture of me, in front of the cinema multiplex. I made a peace sign with my right hand. The phone flashed. I looked at the picture and studied its composition. My slight figure, surrounded by a landscape of overwhelming pathos. I saw that the space’s hidden potential had finally been realized: a staging ground for compelling content. At the edge of the world an aesthetic oasis springs forth. A bounty of potential images, all imbued with an elegiac aura.

“You know, it's funny that you mention those ghost cities.” My ears perked up. I reemerged from my dissociative state. He’d been thinking over what I’d just said in the chat. He was giving me a considered response. “I’ve always pictured all of my work shifts as little bricks being added to a giant skyscraper. But it's just like you said. The building is for a city that nobody lives in yet. Big luxury apartments that are all empty. Sorry, I don’t know if I’m making any sense with this.”

I typed out you are, despite not understanding his leap in logic. How did the hours at his dead-end job become the building material for an unpopulated housing project? Did I miss some connective tissue? Then again, I’d never held down a nine-to-five. Maybe I just couldn’t relate.

“What I mean,” he continued, “is that things don’t really matter much, outside of your job. And then your job, it turns out, doesn’t matter much either. So the only thing I’ve found that really matters, for me anyways, is gaming. Because even when I’m not playing a game, I’m still in the mental mode of not-playing, like I’m thinking constantly about when I will get to play the game next. Love and friends and money, those are all great, I get it. But they can also start to bore you. Gaming stands outside of that. Outside of the boredom. There’s the world of gaming in here.” He pointed to the screen. “And there’s the world of boredom out there.” He pointed to his bedroom window. “My personal heaven and hell. Staying in the game for as long as possible—that’s my key to survival. Everything outside of the game is just no longer useful. Or whatever use it may have had, like back in my parents’ day, that's over you know? Like out there…that’s the real ghost city…” Mateo trailed off. He clicked on the trigger buttons on his controller. The reanimated corpse of an executioner approached him with a giant axe.

I replayed his monologue a few times over in my mind, extracting a sense of satisfaction from every word. An intuitive conclusion from Mateo, derived through my direct involvement. The proverbial joystick pulsed within my hand. And the dichotomy of our interpretations—that contrast had some real torque. I wanted to travel to the ghost settlements as a gonzo tourist. Mateo saw himself already a resident, longing for escape. There was a dialectic there, one that could propel us forward into new configurations. Sexual and intellectual stimuli synthesized into the sublime.

Mateo was decapitated. The executioner held his head by the helmet and thrust it down a stairwell. A LOST TRANSMISSION banner scrolled across the screen. The excavation ends here. NEW GAME?

“Godammit,” said Mateo. It had been a particularly long run. Almost four continuous hours and all without a bathroom break. He usually didn’t survive that long. “So what’re you guys thinking?” The Glacier Freeze sloshed in the back of his throat. “ I could go one more round. Or I can call it a night. Let’s get a yes or no poll going in the chat.”

I looked at the time. 2:00 AM. I felt a strong pull to get to bed so that I’d wake up at a decent time. The days had begun to lose their shape, I was sleeping-in more and more. Signing off was the sensible option. But just before my exit from the browser window, I stopped myself. What exactly did I have to wake up in the morning for? Tomorrow held no obligation. The morning and afternoon exhibited no discernable difference to me. Not anymore. What value did “fully-formed days” hold within a shapeless life? The only thing left to lose was time with Mateo. I re-entered the chat.

Yes. Let’s give it another go.

Mateo laughed. “Don’t know why I even do these polls. You always tell me to keep going.”